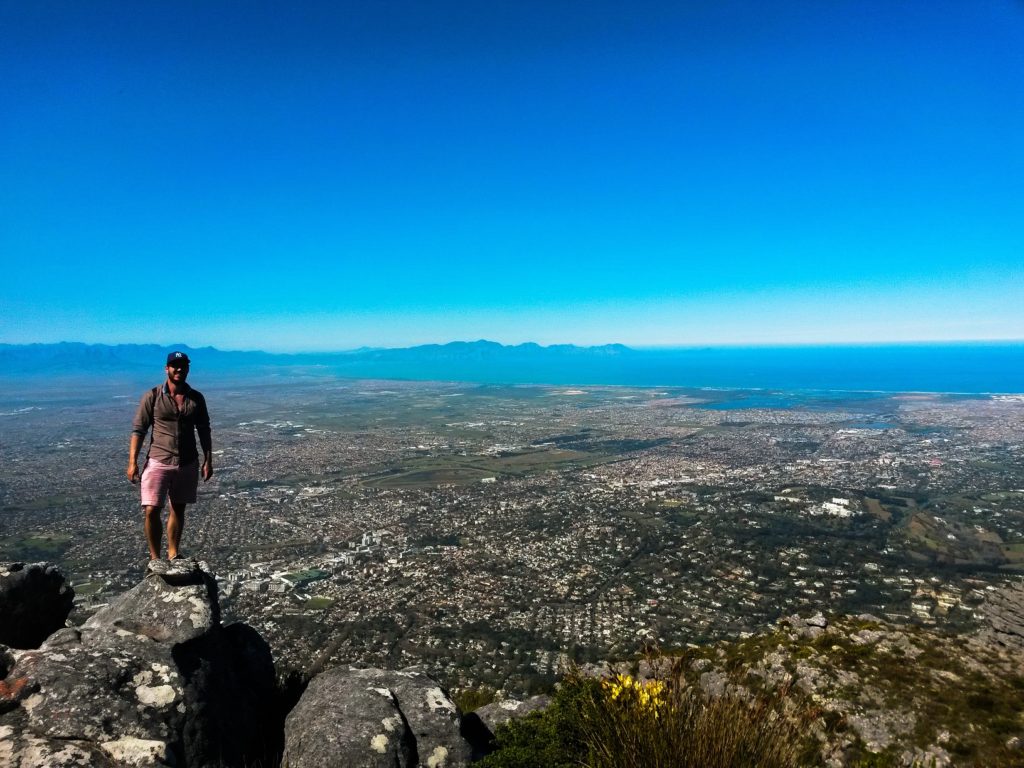 After I visited Johannesburg and took a little trip to Blyde River Canyon and the Kruger National Park, I decided to book a flight to Cape Town, as a lot of people told me that there is not much to see between the two cities.

After a short flight involving interesting conversations with a jet-lagged Jewish lady living in South Africa about the charities she manages and an Indian sales agent for computer software jetting around the world, I arrive in Cape Town in the middle of the night. My new jet-lagged friend tries to call one of her auxiliary chauffeurs to take me from the airport into the city, however she is not able to reach anyone and so I take a cab to the hostel. It is half past midnight when I finally arrive. As I am a very light sleeper who hates nothing more than people thinking a dorm room is THE place to have midnight skype sessions (or other activities involving even more increased sound levels..), I use all my Ninja skills to get ready for the night as quietly as possible. About four hours later I realize that – sadly – I belong to a dying species of hostel travelers.

In the morning, still a little sleepy I decide to go for a nice hike up Table Mountain. Simone from the reception recommends the “Skeleton Gorge”, a hiking trail starting in the Botanical Gardens in Kirstenbosch. As it is technically winter I put on a flannel shirt (which I came to regret about an hour later) and order an Uber to take me to the starting point. Simone’s tip for ordering an Uber in Cape Town (and maybe also everywhere else too): always pay by cash and also only reveal your destination to the driver by sending it via the app once you sit inside the vehicle. This minimizes the chance of the driver taking you someplace you do not want to end up (there are a lot of those in South Africa). 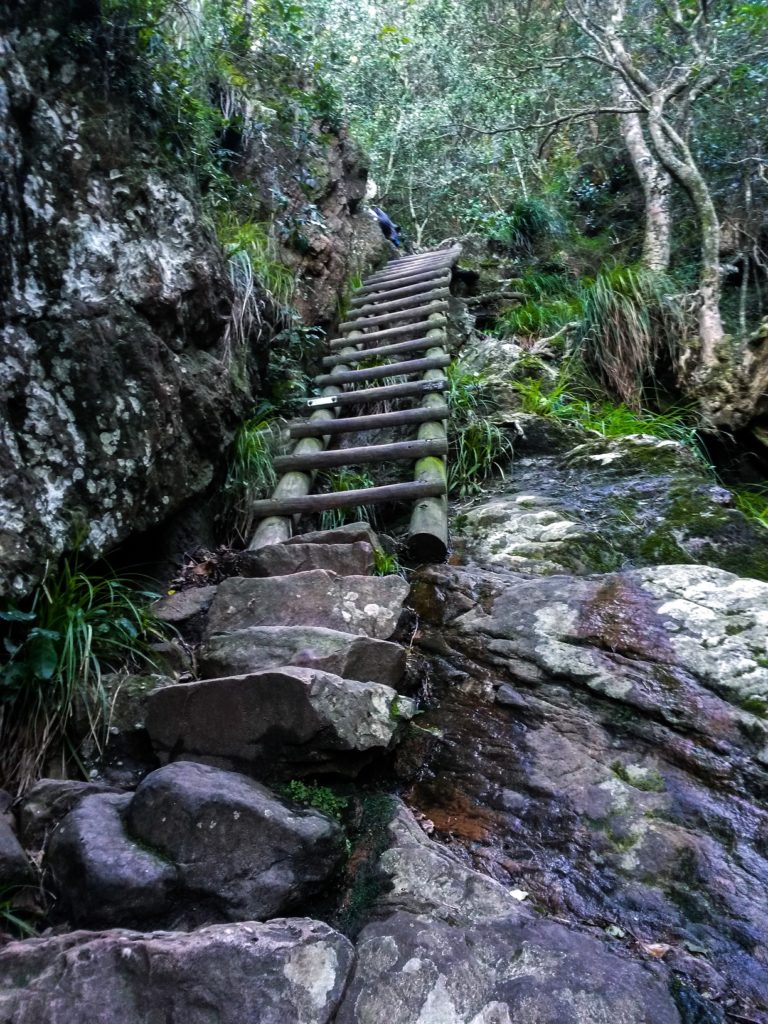 At the beginning of the hiking trail stands a sign warning potential hikers about the dangers of doing the Skeleton Gorge. Among the ever present danger of being robbed (“Never walk alone!”) it also advised to only go up if you are in a good physical condition. Coming from Germany, where warning signs like this one can basically be  seen as a lawfully necessary but not that accurate representation of potential dangers, I am confident and looking forward to a nice and quiet hike. About five minutes later I wish I had left the flannel shirt at home and opted for a sleeveless shirt instead. My waterproof daypack is clinging to my back (apparently a waterproof plastic bag does not allow for a lot of air circulation) and I am grateful that I followed at least one advisement on the warning sign: take at least two liters of water with you.

The trail winds up the mountain through a beautiful forest on dangerously steep cliffs and at one point I even have to climb up a small waterfall. I get a WhatsApp message from my mum asking me what I was doing in the middle of a forest next to Table Mountain. Apparently she checked my blog and was a little worried about my current location. I climb up about 930 m, but I am rewarded with an amazing view from the top. For the way down I decide to take the cable car as climbing up was enough exercise for the day.

After the exhausting past few days, I sleep in the next day. I decide to visit the V&A Waterfront and in the afternoon I do a free walking tour of District 6. Our guide’s name is Rico and he grew up in District 6 as a kid, but was then forced to leave as the government declared District 6 a “whites only area” because it was allegedly needed for “the white man”. He tells us how the houses of thousands of people were demolished by the government, forcing them to move out of the city. However, religious buildings like churches and mosques were not torn down as “a sign of tolerance”. 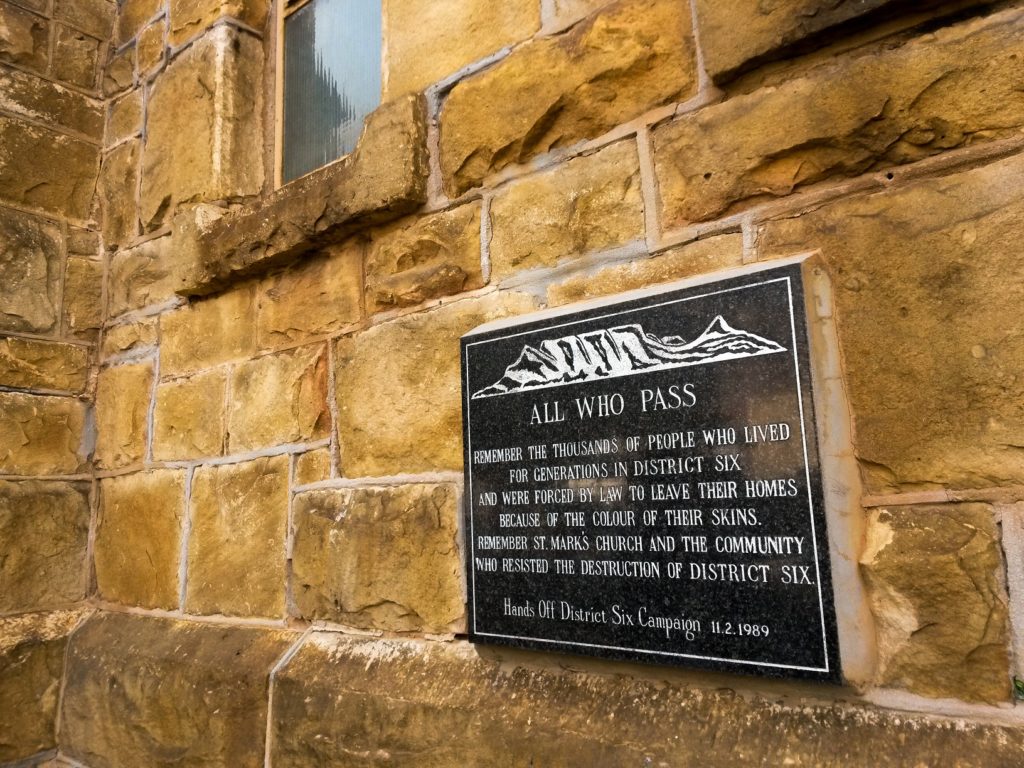 After all houses were demolished and the people had left, the area just lay broke without anyone using it. The fact that the apartheid only ended about 22 years ago when I was already born is unbelievable to me. However, although officially over, while traveling South Africa one can feel that the apartheid is still in people’s heads and it will probably take more than just one generation until the ramifications of this period have disappeared. While talking to Rico I can tell that this is a matter of the heart for him, and he tells me that the reason he is doing these tours is to tell people about this horrible time and make them aware that all of this happened not too long ago.

I go back to the hostel with a lot of thoughts on my mind. Growing up and going to school in Germany means that you are constantly made aware of what racism leads to and are very sensitive to topics like this. However, as this happened in Germany long before my generation was born, you somehow think that humanity has evolved since then (at least this is how I feel). Hearing from someone who has witnessed the apartheid first hand and is only a couple of years older than you really gives you a lot to think about.

In the evening I go out with my friend Anna to get some dinner. While we enjoy the delicious food we talk about the impressions of the tour. As we walk back to the hostel a small boy comes running across the street and starts begging for money. I immediately fall back to my reflex of ignoring people begging for money, as there are a lot of them in the city where I have studied. The boy follows us for another 50 meters until he gives up. As I lie down in bed and think about what just happened I start to feel sick. I am no longer in Germany, where every idiot who is only remotely capable of writing his own name gets enough money from the state to not be forced to live on the street (and please don’t get me wrong: I don’t mean the refugees coming to Germany, but those fearing that the money needed for receiving refugees will lead to cutbacks in the money they get – literally for doing nothing). Even though a social system has been implemented in South Africa in 1997, a lot of people are still suffering from poverty. This boy was hungry, and although I don’t have a lot of money, compared to him I am rich. I can afford something to eat whenever I want and sleep in a warm and cozy bed with a roof over my head. Hell, I am travelling the world, and only because I was lucky enough to be born in a country where everyone has access to education. This boy does not have these privileges. I could have easily given him enough money to have a feast, but I didn’t. These thoughts keep me up for quite some time. 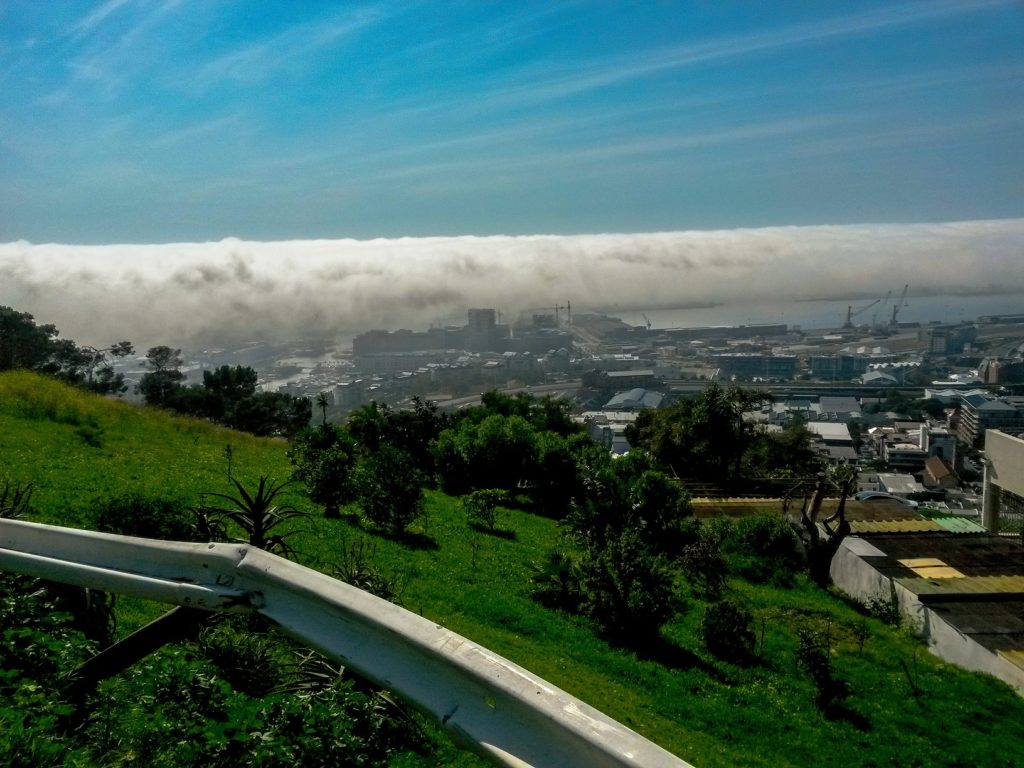 On my last day in Cape Town I decide to explore the city a little more. Rico had given me the tip to visit Signal Hill where a canon is fired every day at noon. I walk up Longmarket street and stop at the end of the road. I enjoy the view off the waterfront covered in clouds. Nearby an old lady is weeding her garden. We get to talking and she tells me that when she moved to this place no one wanted to live here. Now the area is highly in demand and people have asked her to sell her house, but she would never do that, and admiring the beautiful view, I can understand why. 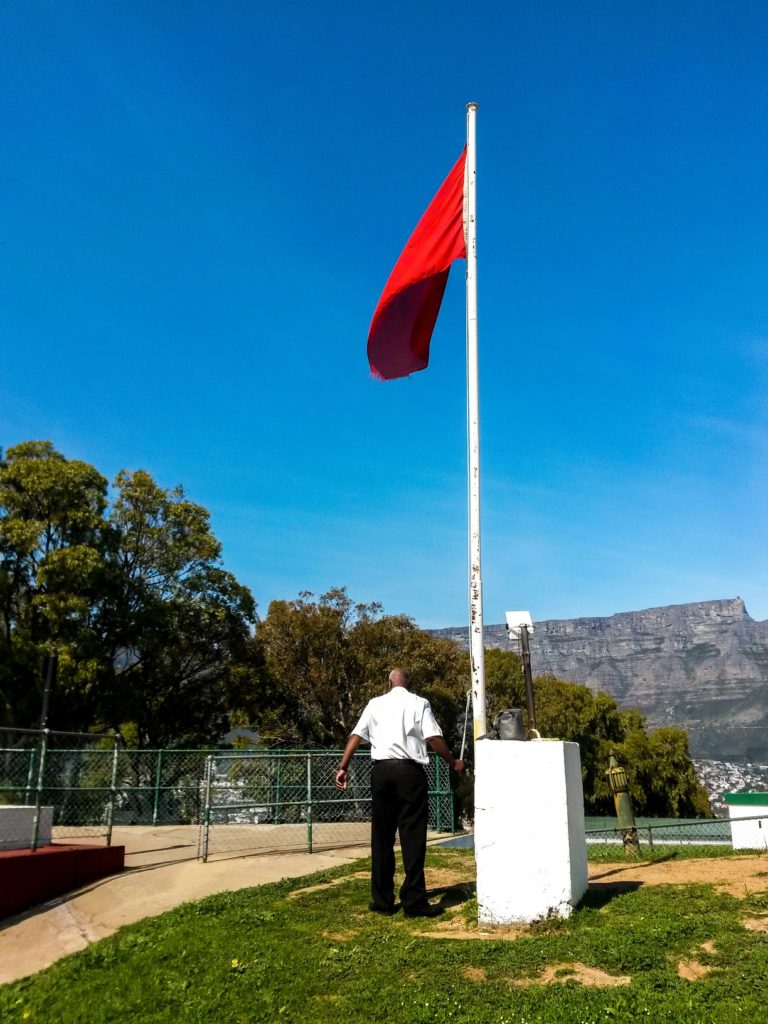 She asks me whether I came to see the canon fire and when I confirm she tells me that I should tell Dudley – the man who fires the canon – that the water pipe in the street is leaking again and that he should pass word to the city officials. I find Dudley on the hill preparing the canon. He has been doing this every day for 15 years. He always prepares two different canons. If the main one misfires he fires the secondary canon, but according to him that almost never happens. I search for a place with a nice view about 30 meters from the canon. The blast of the canon is a little stronger than I expected. I am wondering how Dudley can still hear me after 15 years of shooting this canon every day.

After this, I pick up my rental car and continue my journey towards Durban. 2000 km lie ahead of me, involving the famous Garden Route – according to a lot of reports on the internet one of the most beautiful road trips in the whole world.

About one week after the little boy begged for money I find myself in Coffee Bay, a beautiful little bay in the middle of the Wild Coast. The area of the Wild Coast is mostly inhabited by the Xhosa, one of the indigenous people of South Africa. I stay at the Coffee Shack Hostel, which is heavily involved in the local community, creating working opportunities and promoting education. On the flyers they have lying around they explain their vision and how tourists can behave in order to support it. The most memorable point for me was that you should not give money to begging children as this encourages a begging culture and thereby hinders them from getting a proper education. Reading this puts what happened to me in Cape Town into another perspective. Education really is the most important thing for every country struggling to keep up. Without it, other countries will always find a way to take advantage of them.

This site uses Akismet to reduce spam. Learn how your comment data is processed. 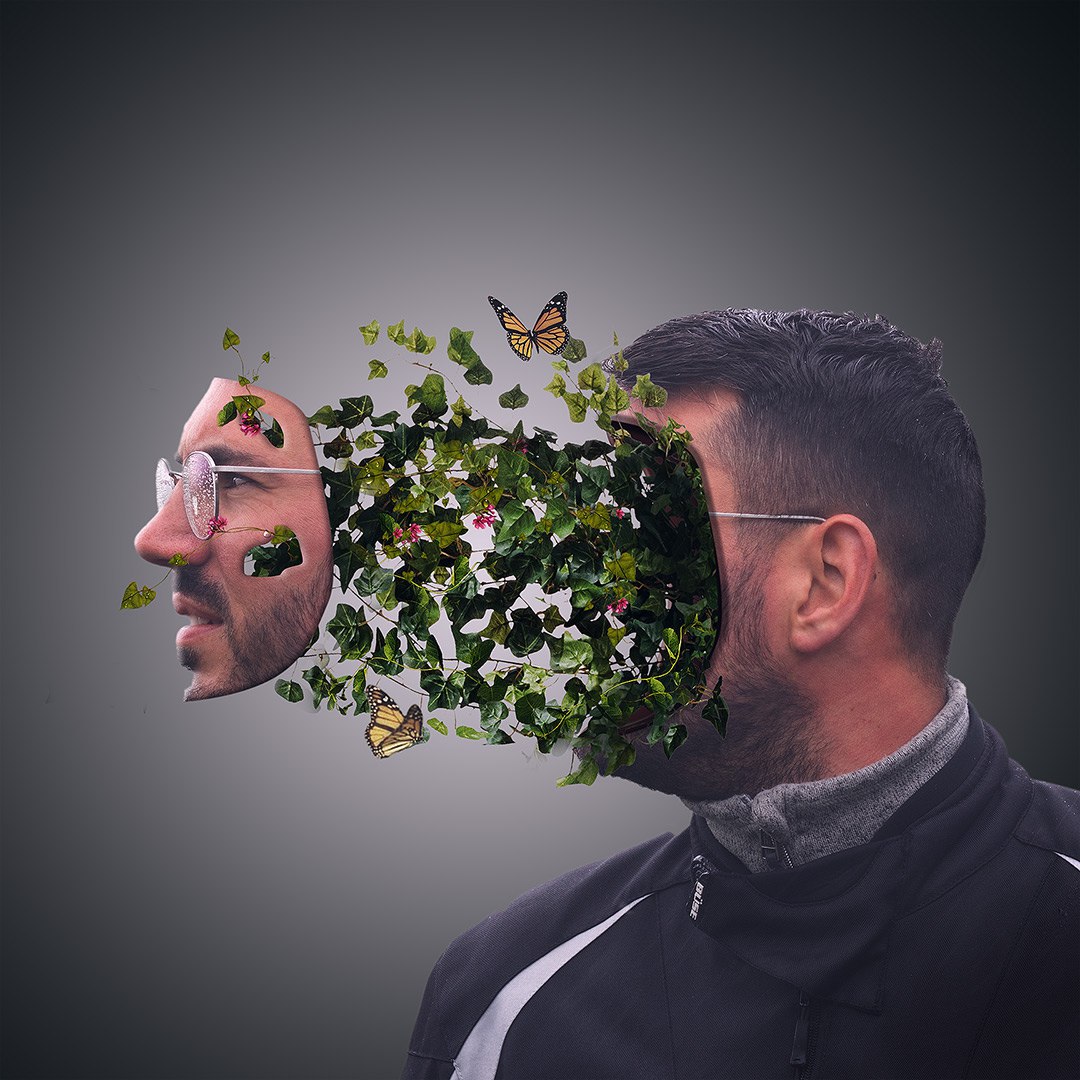 Where am I right now?

Don't want to miss any of my new articles? Subscribe for my newsletter and you will receive an eMail as soon as I have posted something new.